How To Unlock A Signed PDF 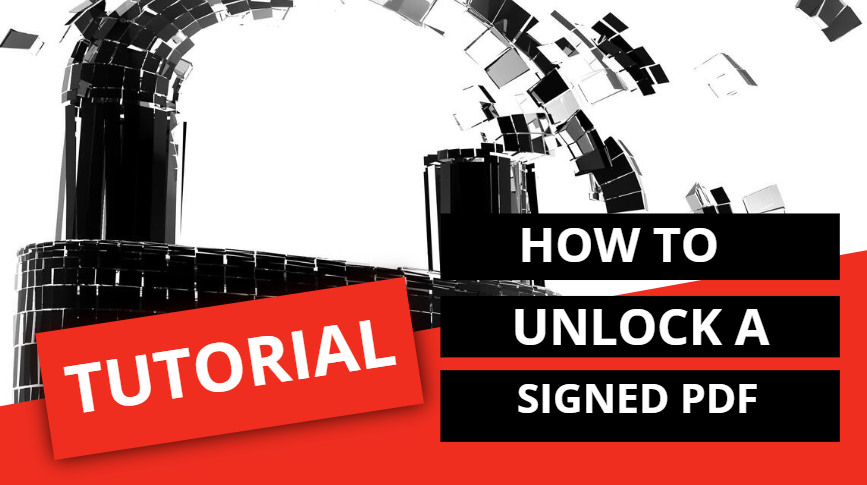 A PDF is stopped to prohibit any form of alteration the moment the file is signed with an ID or digital certificate. In this manner, only the signer(s) will be able to delete their signature to permit modification. However, an online tool can also unlock a signed PDF file. In addition, you can even use various apps and programs to carry out this activity of unlocking a PDF.

Consider for a moment that you signed a PDF document but have forgotten the password to access it. It is quite sensible to have a tool that enables you to unlock signed PDF files in such circumstances so that you can use it to edit the signed PDF. Moreover, ask the signer to be in charge of erasing the digital certificate if you haven't already done so if you haven't signed the document.

Following that, we'll outline all the steps you need to take to unlock a digitally signed PDF so you can print and edit the documents. You'll observe that the process is more straightforward than it first appears. Therefore, without wasting any more time, let's quickly jump into the topic.

How To Unlock A Signed PDF

One of the best online tools for enabling anyone to unlock signed PDF files is "Unlock PDF". The tool is compatible with all five major operating systems, so you don't need to worry if your device will support it or not. That's not all, but you can also unlock digitally signed PDF files without downloading or installing any software. Isn't that fantastic?

What Do You Need To Know About Unlock A Signed PDF

Before unlocking the protection from a signed PDF file, there are several things to think about. These pointers will assist you in making a signed PDF edition easier, so it has also been blocked:

Take A Look Here: How To Copy Text From A Protected PDF

Which Programs Allow You To Unlock A Signed PDF

Although digitally signed PDF files increase security, there may be occasions when you need to unlock and edit the file for various reasons. The most powerful tools for this task are, without a doubt, those available online, but occasionally you may also require a different program for another operating system.

Unlock A Signed PDF From The PC

Anyone could use a variety of tools and techniques to unlock digitally signed PDF files on a PC (Windows, Mac, and Linux). The fact is that everything hinges on the limitations imposed on the safeguarded papers. Here's the answer to your question, "how to unlock a signed PDF on several computer operating systems."

You've undoubtedly needed to unlock signed PDF files for editing at some point. You may have already observed that there isn't a native tool for doing this if you use a Windows computer. However, this issue is readily fixable. Adobe Acrobat for Windows comes with a mechanism to unlock digitally signed PDF files.

There is a highly efficient approach for Mac users to unlock signed PDF files as well. The fact that internet apps are totally free is one of their key benefits. Simply create an account using your Google email address to sign up. However, you can always install various apps on your device to carry out this task easily.

Okular, developed by the KDE opensource community, enables Linux users to unlock signed PDF files. It is a free, cross-platform document viewer that is GPLv2+ licensed. A wide variety of document formats, including PDF, MD, PNG, and CBR, are supported by the application. You can edit your digitally signed PDF file in addition to simply unlocking it.

Unlock A Signed PDF From The Smartphone Or Tablet

You may quickly unlock digitally signed PDF files on your smartphone or tablet with the appropriate software (both iOS and Android). This will be explained after the other. So, let's quickly dive into it.

On Android, you must download an app from Google Play Store in order to unlock signed PDF files. To do this, look up "Unlock PDF" in your search engine. Pick the one you like most out of all the options displayed on your screen. However, we always advise looking at the ratings first and selecting the items with the most excellent ratings.

Users of iPhones and iPads can also install a number of apps from the Apple Store or the App Store to unlock digitally signed PDF files. A PDF document is signed because it contains sensitive information, so you must confirm that the author has given you permission before opening it.

Read More: How To Print A Password Protected PDF