How To Remove Metadata From A PDF 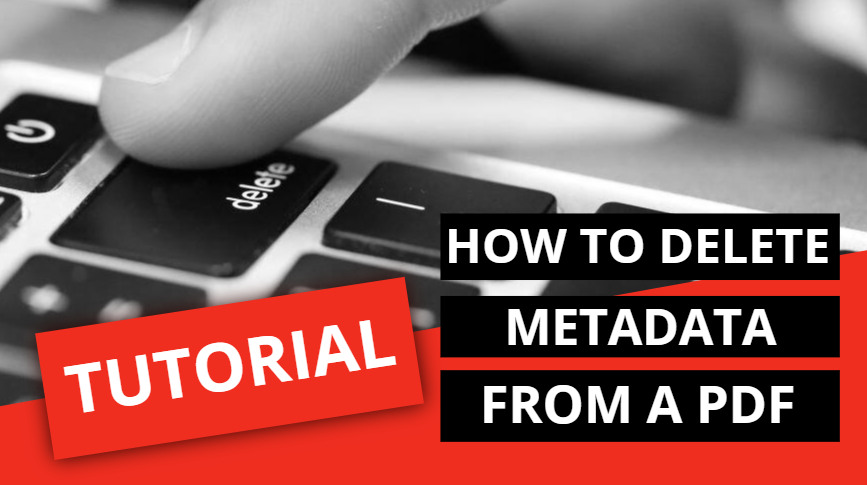 There is always tons of information about you or the document in the metadata of a PDF file, such as the creation date, author, title, update date, subject knowledge, or other details that were utilized to generate the file. You might occasionally want to remove PDF metadata to preserve personal information and confidential materials. Most of you, however, are unaware of how to access, let alone delete, or remove, the metadata data found in PDF files.

However, before moving ahead with the ways to delete metadata from a PDF file, let's see why you might need to carry out this activity. You might do it for document security as the intended audience may not need all of the file's information. Additionally, there may be sensitive information regarding the author or other specifics that you've to remove from your file. Whatever the reason, knowing how to carry out this task is essential.

Given that, this article is quite helpful. Here, we'll discuss some of the best PDF metadata removal tools and provide a step-by-step tutorial to help you do it. Simply scroll down to discover the practical strategies. However, make sure to use the method that suits you the best.

How To Remove Metadata From A PDF

These are the easy steps you need to follow to delete metadata from a PDF file with this online tool:

Additionally, if you want to edit your PDF file, you can use "Edit PDF" and edit it as you like.

Being able to delete metadata from a PDF file brings us to our next section. In this part, we'll learn about a few aspects to consider while carrying out the activity.

These are some of the key elements to remember while removing metadata from any PDF file:

Check This: How To Combine Multiple PDF Files Into One

Which Programs Allow You To Delete Metadata From A PDF

After you've seen the tool we've demonstrated, it's time to provide you with different alternate apps enabling you to delete metadata from a PDF file. The samples we'll give you in the following sections will need to be downloaded and installed in this case because they aren't cloud-based software. We'll differentiate based on the type of electronic gadget handled.

Delete Metadata From A PDF From The PC

A computer is undoubtedly one of the most used devices, so it's essential to know how to delete metadata from PDF files on computers. Here, it's crucial to consider whether you operate with Windows, Mac, or Linux because different options will function better for other operating systems depending on your use.

For anyone who wants to remove metadata from a PDF on a Windows device (be it Windows 10 or any of its prior versions), it's good to use Metadata++. That's because, other than being a Windows-friendly application, it allows you to easily bulk-edit a larger volume of PDF files without selecting them individually.

Mac users can download and install Adobe Acrobat Reader. It's a good instrument that will undoubtedly provide you with the desired outcome. Remember that Adobe, the firm that invented the PDF format, provides the most cutting-edge products for working with PDFs, most of which are paid for. However, if you don't want to spend your money, you can always choose to use online tools.

In Linux, an application called "Master PDF Editor" will allow you to delete metadata from a PDF file of your choice. It's free, so you can use it without hesitation. However, there are alternatives available to this program that you can use to carry out the task. One of them is, of course, using online tools.

Delete Metadata From A PDF From The Smartphone Or Tablet

Remember that not everything in today's world is a computer. Two frequently used gadgets are tablets and, more importantly, smartphones. As a result, they increasingly perform tasks similar to computers.

One of the most popular mobile and tablet operating systems available is Android. You can find several installable tools that let you remove metadata from a PDF file in its official app store, Google Play, which is available for this platform. We recommend that you choose the option with the best value or try a few to determine which one you like.

Users with an iPhone or iPad can access the App Store to find the specific App they require; in this example, one intended to remove metadata from a PDF, just like Android users have access to Google Play. A long list of software applications compatible with this category of Apple technological device can also be found.

Read More: How To Change The Page Order In PDF