How To Open A PDF In Word 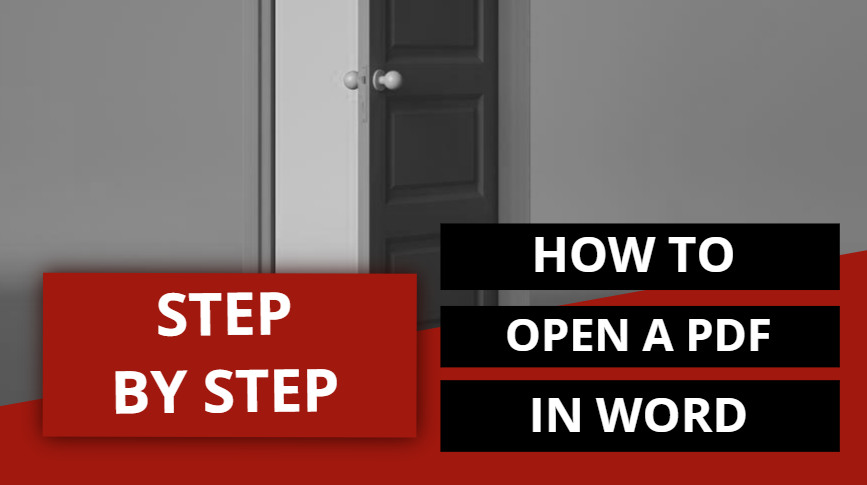 Portable Document Format (PDF) files can be customarily viewed using PDF viewers. Moreover, these types of files include both text and graphical elements. But the main question is can we open a PDF file in Microsoft Word? If yes, how? Like PDF files, with Microsoft Word, you can also create and edit documents with text and graphical elements. Therefore, it'd make sense for Word to open PDF files. But sadly, that isn't the case.

There are various situations where you might feel the need to open PDF in Word. One of the most common is when someone sends you a file in PDF format that needs large-scale changes. In such a case, it won't be possible for you to edit the document using PDF editor applications. And that's where you might end up looking for ways to open a PDF in Word so that you can carry out the editing staff.

If you just try to open a PDF in Word, you will see that what happens is that the file gets converted to another format, and what you are seeing is another document different from the original.

Although there isn't any one perfect solution to this issue, there are various good-enough solutions. In this write-up, we'll mention some promising solutions to opening PDFs in Word. We've covered you whether you're using Windows or Mac, Android or iOS.

How To Open A PDF In Word

If you want to conveniently open a PDF in Word and make changes to your document, the best way is to use an online tool for converting a PDF file to Word. Today, "PDF To Word" is one of the most acceptable options allowing you to open a PDF in Microsoft Word without using third-party programs.

You can upload your PDF file on the tool and follow some simple steps to convert it into a .doc or .docx file. And the best thing is the process of converting PDF into Word is done in the cloud, so you don't need to install any software on your device. Once you're done converting your PDF file to Word, you'll be able to open it in Word and make all the changes you want.

Here are some of the steps you need to follow to open a PDF in Word:

After knowing how to open a PDF in Word using an online tool, it's time to look at various aspects to consider. These are as follows:

Check This Related Article: How To Delete A Page In Word

Which Programs Allow You To Open A PDF In Word

Open A PDF In Word From The PC

Are you looking for ways to open a PDF in Word from your PC and don't want to employ online tools for the same? No worries, we know various methods that you can use to open a file in Microsoft Word within no time. This is how you can easily carry out this action easily and quickly.

Windows computers (both desktops and laptops) lack an in-build tool to convert a document to Word, allowing you to open a PDF in Word in a few clicks. But, don't worry, there are endless alternatives to carry out this activity using easy-to-use software, such as Microsoft Word.

Luckily, opening PDF in Word for Mac users is pretty simple and straightforward. One of the easiest ways to convert a PDF into Word on Mac is using the Google Docs text editor on Google Drive. It's an excellent cloud storage service. All you need is a Gmail account, and you're ready to use the service for performing this task.

If you're a Linux user, you can use a command line utility known as pdftotext (the poppler tools package's part) to convert PDF files into Word and ultimately open it as a Word document. You'll need to install the command "sudo apt install poppler-utils." It works for Ubuntu, Debian, and Linux Mint distributions.

Open A PDF In Word From The Smartphone Or Tablet

The simplest way to open a PDF in Word on Android is by saving it as a Word document. And various applications available in the Google Play Store can carry out this task quite efficiently. You just need to type in "pdf to word converter" on its search bar and select one with the best-rated app.

If you want to open a PDF in Word from iPhone (iOS) or iPad, you'll have to download and install one of the PDF to Word converter programs available in the Apple App Store. Plenty of free apps are specifically designed for performing this task, so it won't be difficult for you to select one.

Don't Stop Here: How To Do Word Count In PDF File